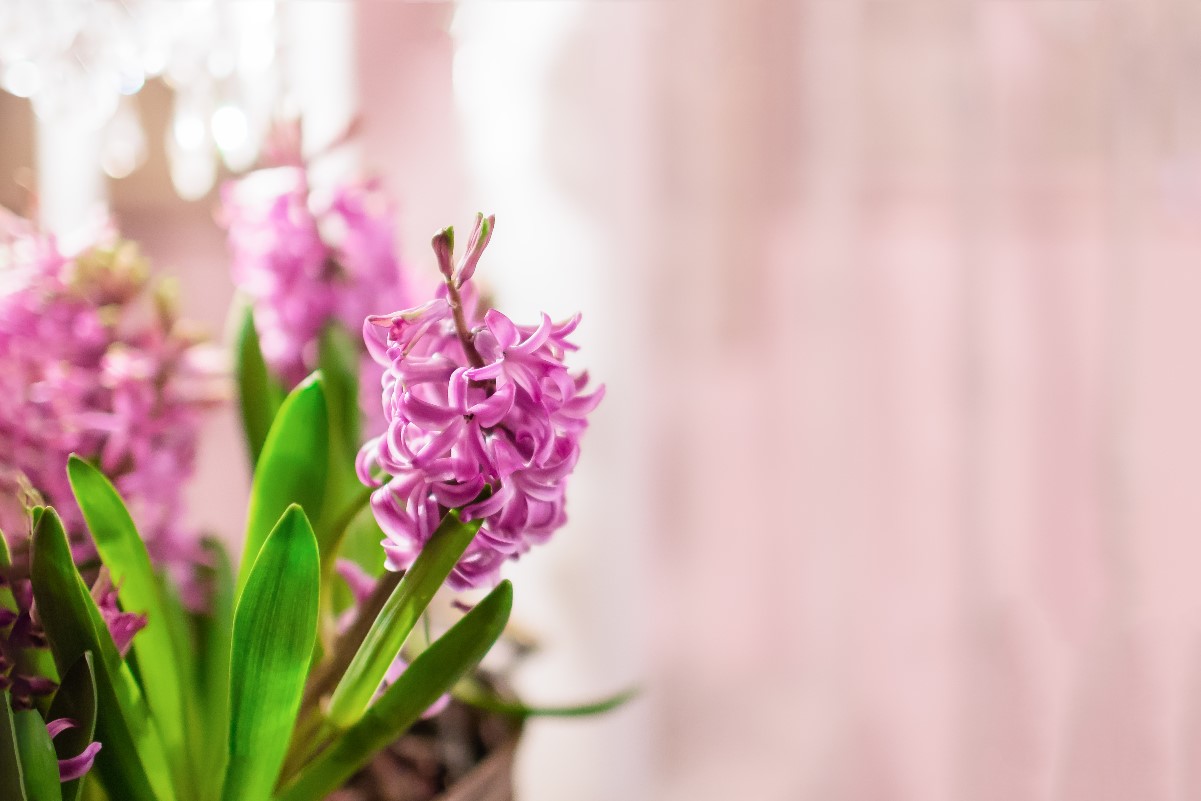 By Jalynn Peterson 10 March 2021 At home
You need about 4 min. to read this article.

Hyacinth at home – the perfect plant for spring

Hyacinth is a popular bulbous plant that can be grown both in the garden and in a pot. It blooms in the spring and is one of the first flowers to appear after winter.

Hyacinth does not have many requirements when it comes to growing it. It begins to develop its leaves and beautiful flowers characterized by an intense fragrance with just a little bit of the first spring sun. How to grow this plant at home? What are its requirements and what is worth knowing about its care?

Hyacinth is a plant which comes from Asia Minor. In Poland the so called eastern hyacinth is cultivated. The flowers of this plant have such colors as

They are characterized by a very intense fragrance, which by some is even described as heavy, so not everyone may like it. There are about 100 species of hyacinths in cultivation and the most popular are those with blue flowers, such as Blue Jacket.

How to plant a hyacinth in a pot?

Potted bulbs should be planted in October or November. The soil should be fertile, e.g. compost soil mixed with sand. The bottom of the pot should be lined with drainage so that too much water can drain away. Bulbs in pots should be planted at a depth of about 9 cm. If you put several bulbs in one pot, you should keep a distance between them so that they do not touch each other. After planting, they should be watered and placed in a dark and cool place for about 10 weeks. Then, when the young shoots appear, the plants should be moved to a sunny place.

Hyacinth does not have many requirements as to soil. It’s important that the substrate is fertile, so it’s best if it’s compost soil. However, it should be avoided if the soil is acidic or too moist. If the substrate contains compost soil, fertilizing the plant will not be necessary

Hyacinth grows best in a sunny location, so it is advisable to place it on a southern or western windowsill. The plant is characterized by the fact that it is resistant to

the plant is characterized by the fact that it is resistant to frosts and cold, spring rains and winds are not terrible for it. There are, however, slightly more sensitive varieties, which are worth covering with a layer of fleece, branches or straw after planting in autumn.

Hyacinth – how to water?

How moist the ground of the hyacinth should be depends mainly on the stage of development of the plant. When the tops of shoots start to show above the soil, you should keep a constant, fairly high humidity of the soil, but you should also remember not to overwater the plant. In summer hyacinth tolerates dry soil quite well and during that time you should slightly reduce its watering.

Hyacinth usually blooms from March to April. After this period the inflorescences should be cut off, because they produce seeds, which weakens the bulb of the plant. The leaves, on the other hand, should be left – they must wilt on their own. When this happens, you can remove them and leave the bulbs in the ground.

The ideal temperature for potted hyacinth is between 16 and 20 degrees Celsius. Hyacinth should be placed away from radiators and places exposed to drafts. The ideal position for it is bright.

If you want the hyacinth to grow in the same place the next year, leave the bulbs in the ground and feed the soil with compost. If, on the other hand, you want to change the growing location, then dig up the bulbs after the season and store them in a dark place until autumn

Move potted hyacinths to a sunny spot after flowering and reduce watering until all the leaves have withered. Then clean the bulbs from the soil and dry them out. Store them in a dark place during the summer and pot them up again in the fall.

Hyacinths look particularly beautiful as part of spring plant decorations. One idea is to place a single blooming plant in a decorative casing and add a delicate decorative element, such as a feather or a sprig of basil. The casing should be the same color as the flower

Another idea is to place several plants in a wide bowl, which is then filled with green moss. Hyacinths also look beautiful in combination with other plants such as crocuses or tulips.